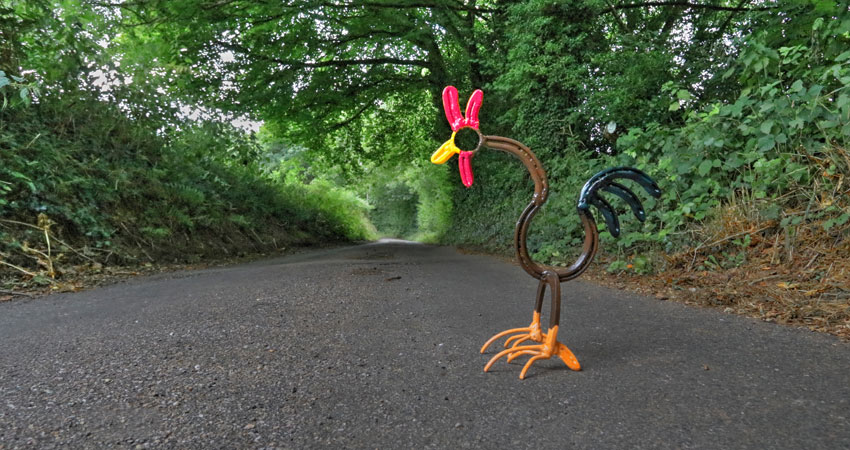 Q    Why did the chicken risk crossing the road without a hi-vis jacket*?

A    Because it had no fluoresce—sense.

In Christmas-cracker land, the groans come early. You have to nail those punning punch lines long before the crackers go into production. I know this because I’ve been writing Christmas-cracker jokes for Eco Shift**. And it was great fun.

Writing cracker jokes is a lot easier than you think. They don’t have to be clever because the market loves a bad joke. According to Professor Richard Wiseman, the brains behind Laughlab, the scientific search for the world’s funniest joke, bad jokes help people bond. Even the most odious relative seated at the Christmas table can laugh at the awfulness of a cracker joke without making the joke-reader think the fault lies in their stumbling delivery. In contrast, an oh-so-clever or a political joke tends to be divisive. It splits Christmas guests into tribes: those who get the joke and those who don’t; those who find it funny and those who think it’s in poor taste.

A game of two halves

Most cracker jokes are a play on words. But why are puns and wordplay funny? A team at the University of Windsor in Ontario decided to find out. They wondered whether it might be something to do with the brain’s two hemispheres interpreting the pun in different ways. Researcher, Lori Buchanan, told Scientific American that “The left hemisphere is the linguistic hemisphere, so it’s the one that processes most of the language aspects of the pun, with the right hemisphere kicking in a bit later.” That’s when you get the joke, when the two hemispheres come together to reconcile the two (usually incongruous) meanings of the pun.

This two-step formula to humour – the difference between what you expect and what you get – starts young. Dr Elena Hoicka from the University of Sheffield says that babies appreciate humour before they’re a year old. When a parent does something unexpected – putting a sock in their mouth, for example – the baby laughs. A cracker joke works the same way: if you already understand the literal meaning of the words, you’ll find humour in the secondary unexpected meaning.

The Yanks colonised your crackers

When Tom Smith invented the Christmas cracker in 1847, he slipped in a motto – a piece of paper bearing a few stirring words of love. As the concept evolved, he broadened its reach by placing snippets of humorous or uplifting verse on the motto. It was all a bit worthy.

How the motto became a joke (trade jargon never caught up: insiders still refer to the joke in your cracker as a motto) is lost to history because a fire destroyed the original Tom Smith factory and its records. We probably have the Americans to thank for our annual mid-winter groan-fest. According to Bob Nicholson, a historian at Manchester University, the late-nineteenth-century craze for crackers coincided with another for American humour. Those transatlantic jokes were fast-moving – wisecracks and one-liners – and much edgier than anything a staid Victorian would come up with. The newspapers were full of them, so why not slip a few on to the Christmas table too?

*It’s hard to believe, but there really is such a thing as a hi-vis chicken jacket.

**Eco Shift edges consumers towards greener choices. Switching to an Eco Shift product requires very little effort on the part of the buyer. Eco Shift wanted jokes for a box of handmade, tat-free Christmas crackers produced in conjunction with the Yorkshire Wildlife Trust. No trashy novelty inside, and every component (apart from the functional element of the snap) is recyclable.

How to write Christmas cracker jokes

There’s no great secret to being a Christmas-cracker joke writer. The technique is the same every time: start with a punchline – a word or phrase with more than one meaning – and work backwards. Just play around with ideas till you find the point of convergence between the two incongruous interpretations. That’s where the gold lies.

In plain English, a word with two meanings. The further apart they are, the better. So sleighs have ‘runners’ and escaping criminals do a ‘runner’. Put the two together and you get something like this:

Q   What happened to the thieves who stole Santa’s sleigh?

Same principle as before. In this case the two words sound the same but take different spellings. Since gamblers play for ‘stakes’ and butchers sell ‘steaks’, there’s plenty of pun potential.

Q   How do butchers win at poker?

A   They raise their steaks.

This is a bit more fun. By tweaking a word or phrase, could you change the meaning or create something entirely new – perhaps something that seems nonsensical until you put it in context? This is the technique in play in that old standby: ‘What do you get if you cross Santa with a duck? A Christmas quacker.’

So what could we do with ‘mince pie’? Is there a joke to be had by twisting it into ‘mince spy’? To get some ideas, imagine what a mince spy might do.

Q   Who did the Russians send in to steal Santa’s baking recipes?

Q   What do you call a tandem built for a pair of snowmen?

A   An icicle made for two.

We’re all decent, honest copywriters, obsessed with originality, so we wouldn’t dream of stealing another writer’s joke. But improving an old and less-than-perfect one – well that’s fair game.

Here’s a joke that was among the winners in TV Channel Gold’s 2019 cracker-joke competition: ‘Why has Santa been banned from sooty chimneys? Carbon footprints.’

Doesn’t quite make sense, but it is a half-decent idea. Perhaps we could pitch it differently:

Q   Why is Santa no longer climbing down sooty chimneys?

A   He’s reducing his carbon footprints.

Need a joke or two for a speech or for your own box of Christmas crackers? Drop me a line.